skip to main | skip to sidebar

When we were still expecting my first son, I built this rocking chair.
Walnut, titanium, plywood

Posted by Joey Gottbrath at 2:10 PM No comments:

In early 2011, Megan, Yosha, and I strolled into an open house in the South of Market area, on Tehama street, to a small, poorly lit TIC in a large building. Although we were not in love with the unit, we were impressed by two things; the unit was actually in our budget (and in the city), and we really like the realtor, Betty Hall.
We continued to work with Betty over about a 6 month period, and looked at a number of properties, until we finally came full circle, back to Tehama Street, to a 1907 edwardian triplex; 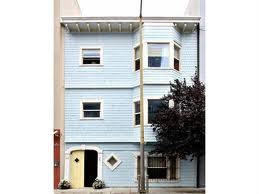 every room had a locking door, as the rooms were rented out separately by the landlord 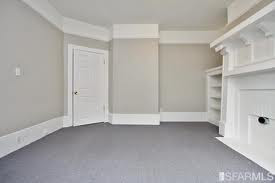 The listing said " flooring ready for your personal touch!"
Under the carpet was a mess of particle board, old linoleum, and layers of Nazi- era newspaper. 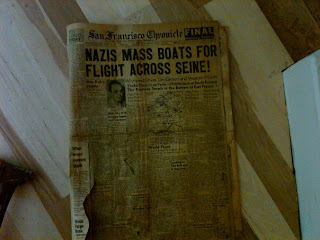 But it had good bones, and was relatively spacious. 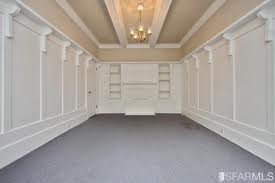 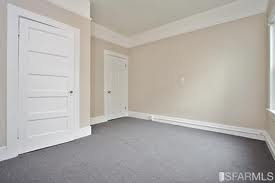 It was a middle unit in a three unit building. The condo conversion was complete, but had been done rather hastily (lots of exposed pipes, conduit, etc). We knew that there was a lot of work to do before it was livable, but it was in our price range. We made an offer, and to our surprise, it was accepted.

What followed was a blur of paperwork and emails between ourselves and numerous financial strangers. Right around Christmas we got the keys and became homeowners. I thought the renovations would take 2-3 months. So they took 6.

With the help of a couple of friends, we pulled out carpets and walls.
We had decided early on that we were going to do the work with city permits, but had no idea how that choice would complicate and slow the process.
First we had to get stamped architectural drawings: 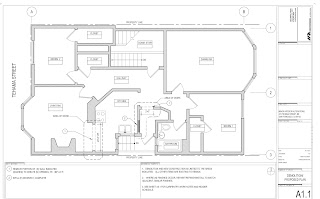 Then we had to hire contractors, design the kitchen, choose our flooring, and begin the dirty work.

The room pictured above had 4" drop to the far corner, so we had to shim it out with 8' triangles before laying in the subfloor 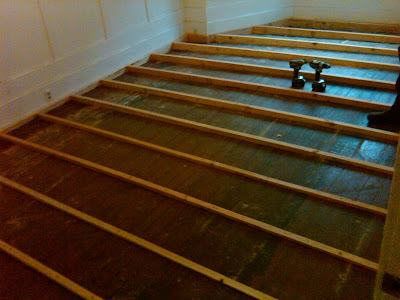 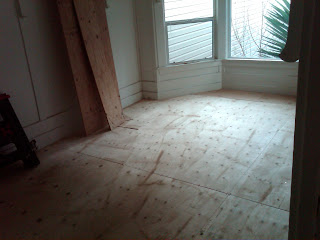 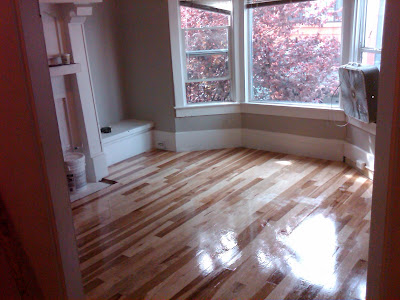 That brings us to the kitchen; by far this was the worst room in the house. What this picture does not show is that the 40 gal. exposed hot water heater is located just to the right of the stove, and all the exposed plumbing is the result of the condo conversion done in the nineties. There was NO counter space or cabinets, and the sink, to the left, was painted, vintage 60's. This picture does show the wall to the right of the sink that we removed. We installed a 6' header, giving access to the front room (pictured above). We also replaced the 40 gal. tank with an on-demand unit. This last item required a new gas line. 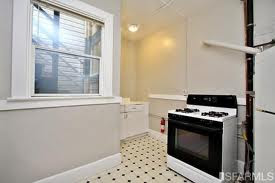 This next shot shows the floor open (to allow for the new gas line, and 6 circuits servicing the kitchen). It might seem like a low-quality picture, but it actually has a special filter applied called "freaked out home owner half way through a scary reno" 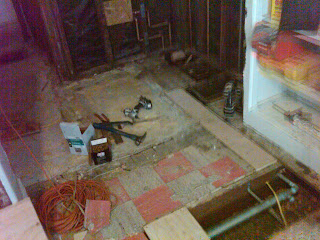 and then the water heater, installed 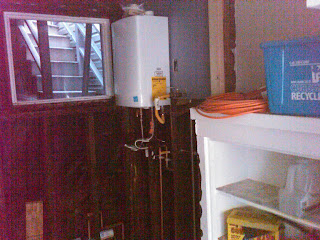 The biggest fight my wife and I have ever had was over the layout of the kitchen.
Here is my idea: 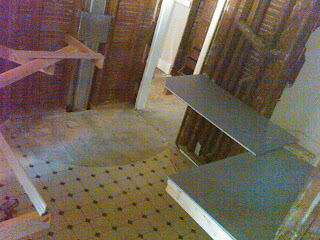 and here is hers: 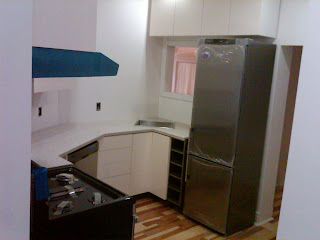 Guess who was right?

So, two years later, now that the SF real estate market has heated back up to the point that we could never afford anything to live in other than a cardboard box…we have a cozy home to raise our family. 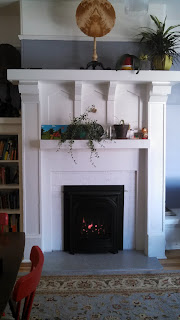 Posted by Joey Gottbrath at 1:53 PM No comments: 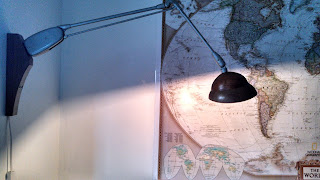 My wife sys that every room should have three light sources, and it took me about a year to make this one, so I think I will buy the other two at Target. It is made from a repurposed desktop lamp from the 60s, and some walnut bowl blanks I had around the studio.
Posted by Joey Gottbrath at 12:26 PM No comments: 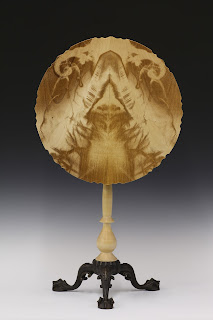 They are a continuation of the previous piece I did out of walnut (SUNDARBANS WETLANDS) but use interchangeable tops and cast bronze bases. This production formula gave me more freedom to explore different subject images for the lazer cut tops. 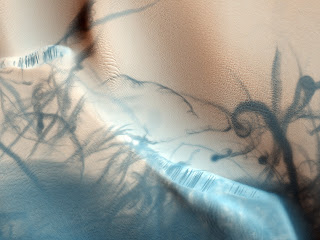 Image for "Dust Devils on Mars" 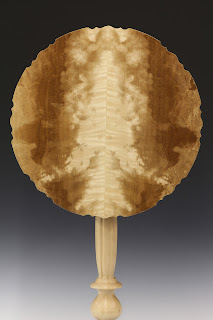 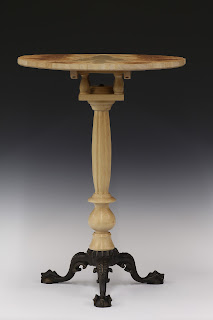 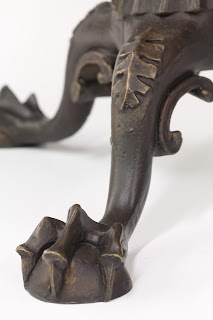 Posted by Joey Gottbrath at 5:43 PM No comments: 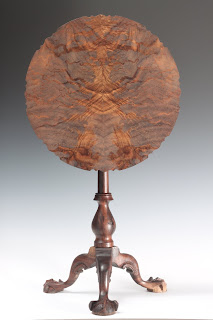 Posted by Joey Gottbrath at 10:15 AM No comments:

These pieces were created by placing bookmatched aerial images of natural and man made disasters on the tops of Queen Anne pie crust tilt-top tables. This work was funded in part by a grant from the Arizona Commission on the Arts. 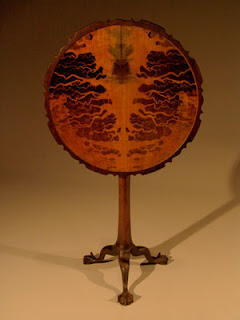 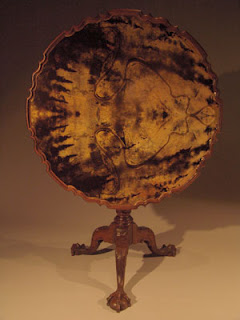 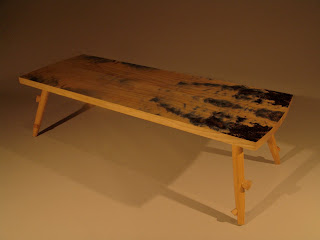 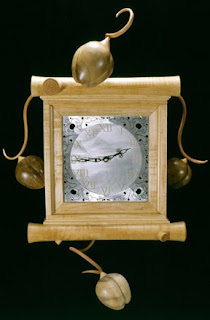 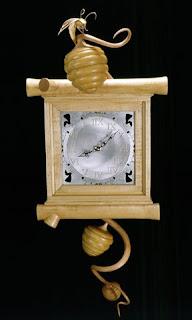 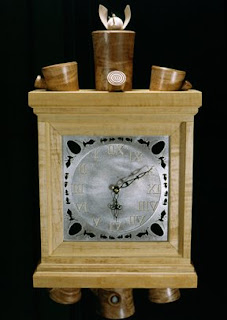 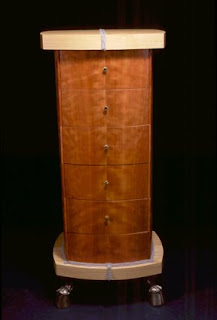 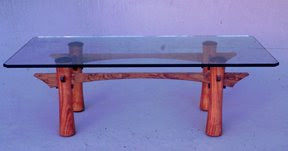